The Impact of Shilo on the village of JALUD

On Friday 13th May 2011 we were asked to join the villagers of Jalud in their walk through the village to protest the cutting off of electricity to a part of the village which is sandwiched between two settlements. The villagers have been served with an official military document dated 4th May 2011 stating that they have until 19th May to lodge their opposition to the Israeli instruction.

At the town hall in a meeting with the mayor we were shown a large map of the area with the dates in large letters of when the settlements were begun.

Shilo was the first to be constructed in 1979 and since then there have been major periods of construction that expand the settlements;  there are now 7 illegal settlements and outposts surrounding the village of Jayud. The land that has been illegally confiscated is almost 80% of the entire cultivated agricultural land belonging to the village and has been taken illegally and forcefully, instilling fear and uncertainty in the lives of the entire community. 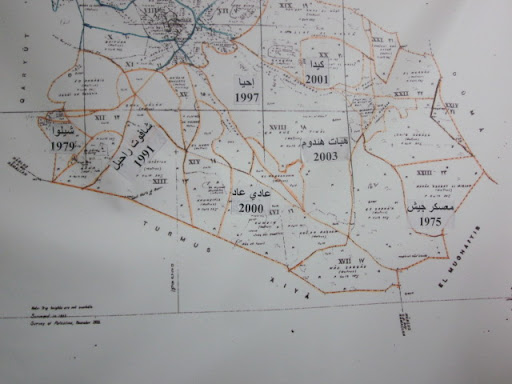 On this hot breezy day we walked through the fertile olive groves and well tended fields,  past the electricity pylon which takes the electricity up to the  tiny hamlet where homes house 6 familes of 30 people. 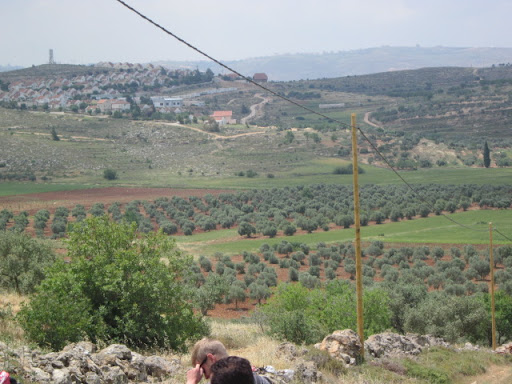 The children of the village followed us so far, shouting their slogans in defiance and pride, before being shooed away from what possible dangers might lie ahead over the little hillock to the red roofed illegal settlements a stone’s throw away.

This time, the only threat might have come from the pit bulls and doberman dogs, tied about 100 yards apart on runs that encircle the illegal settlement;  a more effective and cheaper deterrent than a wall or electrified fence. 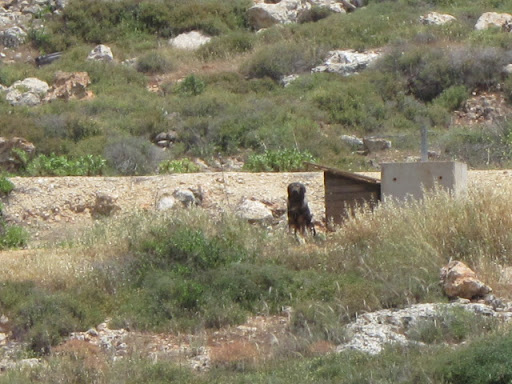 Apparently they believe the Palestinians might imitate their own barbaric incursions, and come shooting and burning down their crops. David versus Goliath. The owner of the two houses stands by his property, two very large houses, which cannot be built upon or extended – they are in area “C” . His own son who married and should, as custom dictates, have been living with him but has had to move away. ‘What can we do?’ he shrugs, but he is staying put and not going anywhere although his fear is, and it is a real one, that one day they will destroy his houses, and his life. You cannot ignore the suffocating, crushing, deadly embrace of the settlements either side of his home, his family, his entire history.  ‘Jalud is 6000 years old!’

Since 1967 wave after wave of Israeli aggression has resulted in the expanding settlements of Shilo and Mizpe Rahil, and the construction of five others. That is not the end of it. A brand new colony is about to be constructed, 1000 of the best agricultural dunums have already been confiscated and Tel Shilo will be the 8th settlement to continue the stranglehold on this lovely village and its people.

It is all part of Israel’s master plan (attach POICA map)to cut off Nablus from Ramallah District with this wall of colonies, preventing any development of surrounding Palestinian areas.

Thus the segregation of areas of Palestinian Territory will be complete; a North West Bank and a South West Bank will be created.  From southwest Nablus to the Jordan Valley there will be no land continuity between Palestinian cities and villages; families will only have access to their relatives and friends through Israeli controlled territories and checkpoints. The Israelis are attempting to prevent the creation of a Palestinian State in which individuals should be able to travel around without restriction.

The story of one man’s attempt to prevent the military from cutting off his electricity is one repeated in a thousand places throughout Palestine; the villagers are not sure they can do anything about it and are resigned to asking international human rights activists to publicise their cases. Solidarity with the people of Jalud may delay the process but the relentless march of Zionist colonization seems unstoppable and the West Bank will be severed almost in half from east to west, not by a concrete wall you can touch but by an ideological wall filled with strangers from other countries, a wall which may not come down so easily. That is why we are here.