There are currently 121 Israeli colonies, often referred to as “settlements”, and approximately 102 Israeli outposts built illegally on Palestinian land occupied militarily by Israel since 1967 (West Bank, East Jerusalem and the Golan Heights). All of these settlements and outposts are illegal under international law and have been condemned by numerous United Nations Security Council resolutions. Israeli outposts are considered illegal under Israeli law.

These settlements and outposts are inhabited by a population of some 462,000 Israeli settlers. 191,000 Israelis are living in settlements around Jerusalem and a further 271,400 are further spread throughout the West Bank. The settler population has grown consistently between 4-6% per year over the last two decades, a much higher rate of growth than Israeli society as a whole (1.5%).

Approximately 385,000 settlers in 80 settlements will be located between the Separation Wall and the Green Line if Israel holds to projected plans.

A total of 9,000 further housing units have been approved in East Jerusalem, and approximately 2,600 new housing units are being built east of the Separation Wall, comprising 55% of all settlement construction activity.

Israeli settlements are illegal under every basic reading of international law:

Article 46 of the Hague Convention prohibits confiscation of private property in occupied territory. Article 55 of the same Hague Convention stipulates “the occupying state shall be regarded only as administrator and usufructuary of public buildings, real estate, forests, and agricultural estates belonging to the hostile State, and situated in the occupied country. It must safeguard the capital of these properties, and administer them in accordance with the rules of usufruct”.

Article 49, paragraph 6 of the Fourth Geneva Convention explicitly stipulates that “the occupying power shall not deport or transfer parts of its own civilian population into the territory it occupies”.

1. Determines that the policy and practices of Israel in establishing settlements in the Palestinian and other Arab territories occupied since 1967 have no legal validity and constitute a serious obstruction to achieving a comprehensive, just and lasting peace in the Middle East;

3. Calls once more upon Israel, as the occupying Power, to abide scrupulously by the 1949 Fourth Geneva Convention, to rescind its previous measures and to desist from taking any action which would result in changing the legal status and geographical nature and materially affecting the demographic composition of the Arab territories occupied since 1967, including Jerusalem, and, in particular, not to transfer parts of its own civilian population into the occupied Arab territories;

Adopted at the 2134th meeting by 12 votes to none, with 3 abstentions (Norway, United Kingdom of Great Britain and Northern Ireland, United States of America).

UN Security Council Resolution 465 (1980-unanimously adopted) made it clear that “Israel’s policy and practices of settling parts of its population and new immigrants” in the Occupied Territories constitutes “a serious obstruction to achieving a comprehensive, just and lasting peace in the Middle East”. The Security Council called upon Israel to “dismantle the existing settlements and in particular to cease, on an urgent ba-sis, the establishment, construction or planning of settlements in the Arab territories occupied since 1967, including Jerusalem”.

The 2004 ruling of the International Court of Justice in The Hague declared that “Israeli settlements in the Occupied Palestinian Territory, including East Jerusalem, are illegal and an obstacle to peace and to eco-nomic and social development”.

Who Profits from the Illegal Settlements in the West Bank: a case study by The Coalition of Women for Peace

Citizens of New York City protest fundraiser held to support the expansion of illegal settlements in and around Hebron. 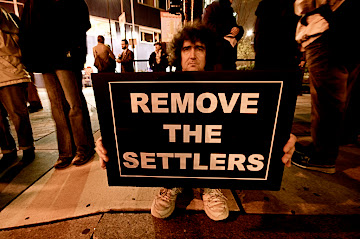 New York, NY, November 16  120 New Yorkers silently picketed at the entrance to Manhattan’s Chelsea Piers this evening to protest against the Brooklyn-based Hebron Fund’s fundraising event to expand Jewish settlements in the Israeli-occupied West Bank city of Hebron. The protesters held signs saying “End the Siege of Hebron,” “Remove the Settlers,” “Return the Land,” “Hebron is in Palestine,” “US Dollars Feed Israeli War Crimes,” and other signs with large photos depicting violence by Israeli settlers and soldiers against Palestinian residents of Hebron. The protest was endorsed by sixteen US human rights and peace groups, three of which are Jewish (see groups below).

About forty people held a separate protest organized by J Street U also at Chelsea Piers criticizing the Hebron Fund fundraising event and Israeli settlements. Some Hebron Fund attendees were forced to walk past the two protests in order to reach the Hebron Fund event.

Riham Barghouti from Adalah-NY commented, “On top of the US government’s $3 billion in annual aid to the Israeli government, the Hebron Fund is in New York City raising tax-free money to support some of the most violent and racist Israeli settlers. All Israeli settlements violate international law. We need to end the use of US tax dollars to support Israeli human rights abuses, and stop groups like the Hebron Fund.”

The fundraising dinner for Israeli settlements came as the Obama Administration is pushing the Israeli government to commit to a temporary freeze of the expansion of Jewish settlements in the West Bank and East Jerusalem. In Hebron, a West Bank city with over 160,000 Palestinian residents, around 600 Jewish settlers, guarded by thousands of Israeli soldiers, regularly employ violence to expand their control over the city by taking over Palestinian homes and shops, and driving out Palestinian residents, according to the Israeli human rights groups B’Tselem and the Association for Civil Rights in Israel.

The Hebron Fund event was organized as a Hudson River cruise and entitled the “Hebron Aid Flotilla” in an apparent attempt to mock the international Freedom Flotilla that sailed last spring to break the illegal Israeli blockade of Gaza. The Israeli military attacked the flotilla in international waters, killing nine passengers, including an American citizen, and injuring an additional 58 passengers. The Hebron Fund announcement for the event stated that “settlements are legal,” and claimed that “the tax deductible status of the meager donations to Hebron’s Jews comes under repeated scrutiny – for no good reason except for racism and anti-Semitism.” The Hebron Fund’s keynote speaker, Caroline Glick, a former adviser to Benjamin Netanyahu, has written in the Jerusalem Post that President Obama is “treating Israel like an enemy.”

According to all major human rights organizations, the UN, the International Court of Justice, and governments worldwide, all Israeli settlements in the occupied West Bank and East Jerusalem violate the Fourth Geneva Convention. In 1979, the US State Department’s legal adviser also issued a legal opinion that has never been revised stating that the establishment of Israeli settlements in occupied Palestinian territories “is inconsistent with international law,” according to The Washington Post.

This is the third consecutive year in which the Brooklyn-based Hebron Fund’s annual fundraising dinner in New York has faced protests. The Hebron Fund is one of a number of US nonprofits that fund Israeli settlements. Others include Friends of Ir David, American Friends of the Ateret Cohanim, and The Central Fund for Israel. According to the Washington Post, “A search of IRS records identified 28 U.S. charitable groups that made a total of $33.4 million in tax-exempt contributions to settlements and related organizations between 2004 and 2007.” A recent New York Times report on these US settlement nonprofits quoted a senior US State Department official saying, “It’s a problem. It’s unhelpful to the efforts that we’re trying to make.”

In 2007, Hebron Fund Executive Director Yossi Baumol told The American Prospect that “[d]emocracy is poison to Arabs,” “Israel must not give Arabs a say in how the country is run,” and “[y]ou’ll never get the truth out of an Arab.” Noam Arnon, a 2009 Hebron Fund fundraiser honoree, called Jewish terrorist Baruch Goldstein “an extraordinary person” in 1995, according to the Associated Press. In 1994 Goldstein massacred 29 unarmed Palestinians who were praying in a Hebron mosque, and wounded over 100 more.